Deal is mentioned as a village in the Domesday book but archaeological evidence suggests its history stretches back much further. Julius Caesar is said to have landed on the Deal-Walmer coast in 55 and 54BC. 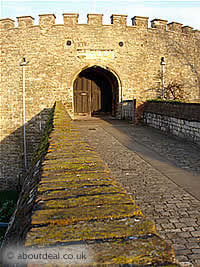 Deal gradually grew from a small fishing village and by the end of the 13th century Deal was an important port.

Sandown (of which only a few stones remain), Deal and Walmer castles were all built along the Deal coast in 1539-1542 by Henry VIII because of the threat of invasion by France and Spain. Their rounded walls were designed to resist cannon fire. When viewed from above they resemble the Tudor rose. Both Deal and Walmer castles are open to the public.

Walmer castle is the official residence of the Lord Warden of the Cinque Ports.

William Pitt the Younger lived here with his niece Lady Hester Stanhope. She acted as his society hostess and was responsible for much of the original layout of the gardens.

After his death she went on to become the most famous woman traveler of the age. Sometimes dressed as a man, she traveled in the middle east and even crossed the Syrian desert. Her biography by Kirsten Ellis is a great read, charting her rollercoaster life in vivid detail.

Other notable Lord Wardens include the Duke of Wellington, Winston Churchill and the Queen Mother. All have left their mark and mementoes from their time are on show, including Wellington’s boots!

To learn more about Deal and Walmer castles go to our ‘Castles’ page. Learn more about Deal’s fascinating history with The History Project’s walking tour.  These engaging tours are filled with interesting stories about Deal’s past and its famous and infamous residents. Fun for all the family.

Another slice of Deal history is now open to the public. Following a long restoration, Ripple Windmill is now back in working order and open on selected days. The history of milling on this site dates back to at least 1695.

Visit Ripple Windmill to find out about the checkered history of the current mill and how it helped keep sailors safe from the Goodwin Sands.

This website uses cookies to improve your experience while you navigate through the website. Out of these, the cookies that are categorized as necessary are stored on your browser as they are essential for the working of basic functionalities of the website. We also use third-party cookies that help us analyze and understand how you use this website. These cookies will be stored in your browser only with your consent. You also have the option to opt-out of these cookies. But opting out of some of these cookies may affect your browsing experience.
Necessary Always Enabled
Necessary cookies are absolutely essential for the website to function properly. These cookies ensure basic functionalities and security features of the website, anonymously.
Functional
Functional cookies help to perform certain functionalities like sharing the content of the website on social media platforms, collect feedbacks, and other third-party features.
Performance
Performance cookies are used to understand and analyze the key performance indexes of the website which helps in delivering a better user experience for the visitors.
Analytics
Analytical cookies are used to understand how visitors interact with the website. These cookies help provide information on metrics the number of visitors, bounce rate, traffic source, etc.
Advertisement
Advertisement cookies are used to provide visitors with relevant ads and marketing campaigns. These cookies track visitors across websites and collect information to provide customized ads.
Others
Other uncategorized cookies are those that are being analyzed and have not been classified into a category as yet.
SAVE & ACCEPT