Learn more about Deal’s fascinating history with The History Project’s walking tour.  These engaging tours are filled with interesting stories about Deal’s past including its notorious reputation for smuggling. Fun for all the family.

Deal really started to flourish in the mid 1600s. In the age of sailing ships the sheltered Deal coast was a haven for ships. At times there would be hundreds of ships anchored off the coast bringing business and prosperity to the area.

The ships would reset their chronometers by the timeball tower before sailing to the far flung corners of the globe.

The book Longitude by Dava Sobel gives a brief but fascinating insight into the problems faced by mariners and the importance of the time ball towers.

The town also became infamous for smuggling. The Deal Maritime museum has many relics from the smuggling era.

In January 1784 the rampant smuggling prompted Prime Minister William Pitt to send soldiers to Deal. Due to a storm all the boats were on the shore and the soldiers set light to them all. The prosperity of the smugglers meant that this was only a temporary inconvenience.

Many of the houses in the seafront conservation area have the remains of old tunnels and secret hiding places used by the smugglers. The Rattling Cat in Walmer, an old coaching inn, is said to get its name from the fact the owner kept many cats with pieces of bone attached to their collars. When strangers appeared in the area the cats would run home and the rattling of their collars would alert everyone that there might be Excise men in the area.

From Smuggling to Tourism 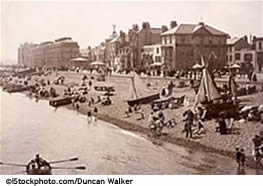 With the advent of steam ships in the 19th century ships no longer needed to take shelter at Deal and the importance of the town as a port began to wane.

During the Victorian era Deal began to emerge as a tourist resort. The first wooden pier was built in 1857, this was later replaced by an iron pier in 1864. The current pier was opened in 1957 and had a new end of the pier restaurant in 2008.

Looking back at the town from the end of the pier gives a snapshot of Deal’s varied past. The beautiful old houses along the seafront form the backdrop for the vibrant bustle of the town.

Today, Deal is growing in popularity with tourists. It frequently receives recommendation in newspapers such as The Times and The Telegraph. It was also named top ‘hipster holiday’ destination for Londoners’ by the London Evening Standard!

Deal on the Big (& Small) Screen

Deal is also proving a popular destination for film crews. Recent film and TV credits for Deal include:

This website uses cookies to improve your experience while you navigate through the website. Out of these, the cookies that are categorized as necessary are stored on your browser as they are essential for the working of basic functionalities of the website. We also use third-party cookies that help us analyze and understand how you use this website. These cookies will be stored in your browser only with your consent. You also have the option to opt-out of these cookies. But opting out of some of these cookies may affect your browsing experience.
Necessary Always Enabled
Necessary cookies are absolutely essential for the website to function properly. These cookies ensure basic functionalities and security features of the website, anonymously.
Functional
Functional cookies help to perform certain functionalities like sharing the content of the website on social media platforms, collect feedbacks, and other third-party features.
Performance
Performance cookies are used to understand and analyze the key performance indexes of the website which helps in delivering a better user experience for the visitors.
Analytics
Analytical cookies are used to understand how visitors interact with the website. These cookies help provide information on metrics the number of visitors, bounce rate, traffic source, etc.
Advertisement
Advertisement cookies are used to provide visitors with relevant ads and marketing campaigns. These cookies track visitors across websites and collect information to provide customized ads.
Others
Other uncategorized cookies are those that are being analyzed and have not been classified into a category as yet.
SAVE & ACCEPT